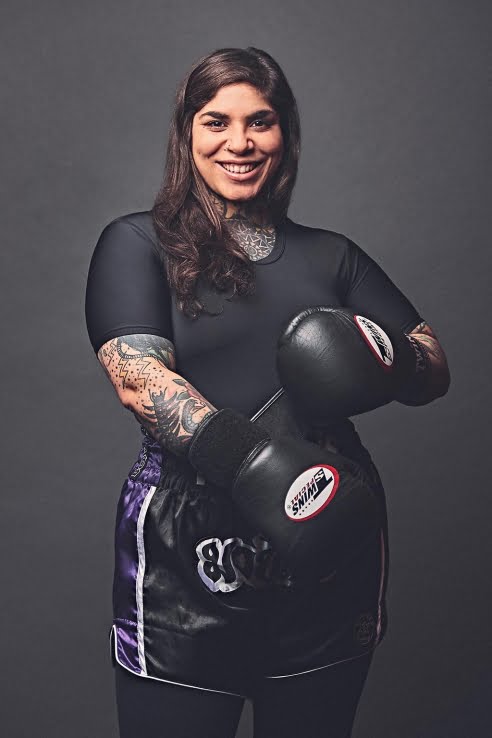 My mission is to have as many people as possible come to me who’ve found themselves on a similar path to mine. Scared to walk into the gym? That was me. Unsure of how to set realistic goals for yourself? That was me. Want to try something new but don’t know if you’re strong physically, or mentally enough? That was me. Don’t see anyone who looks like you in the gym? That was, and to a certain degree, still is me. But the fact that it’s never too late to start making changes and building strength, especially as a female, is being proven more important all the time.

In school I played sports simply to get out of less preferable classes such as Home Economics – hockey, basketball, netball, and rounders. My sporting prowess was probably questionable, but my enthusiasm was enough to get me through! My only other activity was a brief stint in Kickboxing, which I’m fairly certain my dad enrolled me on simply to get myself and my brother out of the house and prevent us from practicing Jean Claude Van Damme kicks on each other. After dropping all sports in the run up to my GSCEs, it wasn’t until 10 years later when I was living in Australia, that I got back into physical activity.

I was in an extremely rough situation emotionally, and decided to take myself outside running, in order to regain some control over the high levels of anxiety I was suffering from. After a few months, I gained the confidence to walk into the gym opposite my house, and signed up for any class they had going, simply to keep my mind in another place. There were step classes, pump classes, trampoline classes, Pilates classes, Yoga classes – I did them all, and I loved them all. I made some of my best friends in that gym, and was lucky to have the kindest, most enthusiastic trainers and teachers, who made me realise that fitness didn’t look like any one thing – I could be stocky and have days when I was suffering, and still be strong, still be a yogini, and still be (relatively) fast.

After returning to the U.K., I signed up for a similar gym immediately, and started training for strength. I never cared too much about the numbers and I had thankfully learned not to be hard on myself in that respect, but I set myself some modest KG goals for traditional lifts, and I hit them. And then I moved them up. And again, and again, until one day I thought I might like to try something a little more cardio-based, remembered that I used to kick things (not just my brother in the back garden), and fell in love with Muay Thai.

Another 10 years later, and I am a graded Kickboxer under a fantastic coach, with a considerable number of interclub fights under my belt, a level of strength I am extremely proud of, a body I love for all the things it allows me to do, and a respectable deadlift. More than that, I gained the confidence to walk into any gym, try any sport, and maybe most importantly, go and do it by myself. The objective now is to provide that for everyone else!

What can you expect from sessions with me? With Strength and Fitness Fundamentals, the aim is to give you a good base of knowledge in exercises that you’ll very quickly be able to implement in your sessions outside of our time together, and the confidence and the ability to see the difference that strength, fitness, and martial arts training can make to your life.

Everyone has the right to a strong and healthy body, and a mind free from some of the anxieties that can arise for those new to, or returning to, exercise. With me as your coach, you’ll exercise your way through and gain knowledge of how all different types of equipment can be used to target your specific goals, be introduced to martial arts pad work as a fitness tool, and over time enjoy the satisfaction of watching your abilities increase exponentially!